I am a planner.  I love organising, lists, schedules.  I’m good at it too.  When faced with a challenge I never want to sit back and see what happens next, I want to plot a course out.  This requires some reflection, coloured pens, paper. Then I scribble and write, plan, cross out, throw it away, start again.  Usually within a week I know where I’m going next and how and why.  I could explain it to anyone who asks in clear, logical steps.

Right now though that isn’t really working.  I had a great plan.  It followed logical next steps.  There was career progression, tied to a good income, there was the possibility of finally getting my name on some property.  I had a sense, as the plan fell into place, of a journey ending.  I could see this situation stretching out, over the next three, five, ten years.  I could see myself driving the route to work in each season, as my children fly the nest and I  move towards my crone-hood. 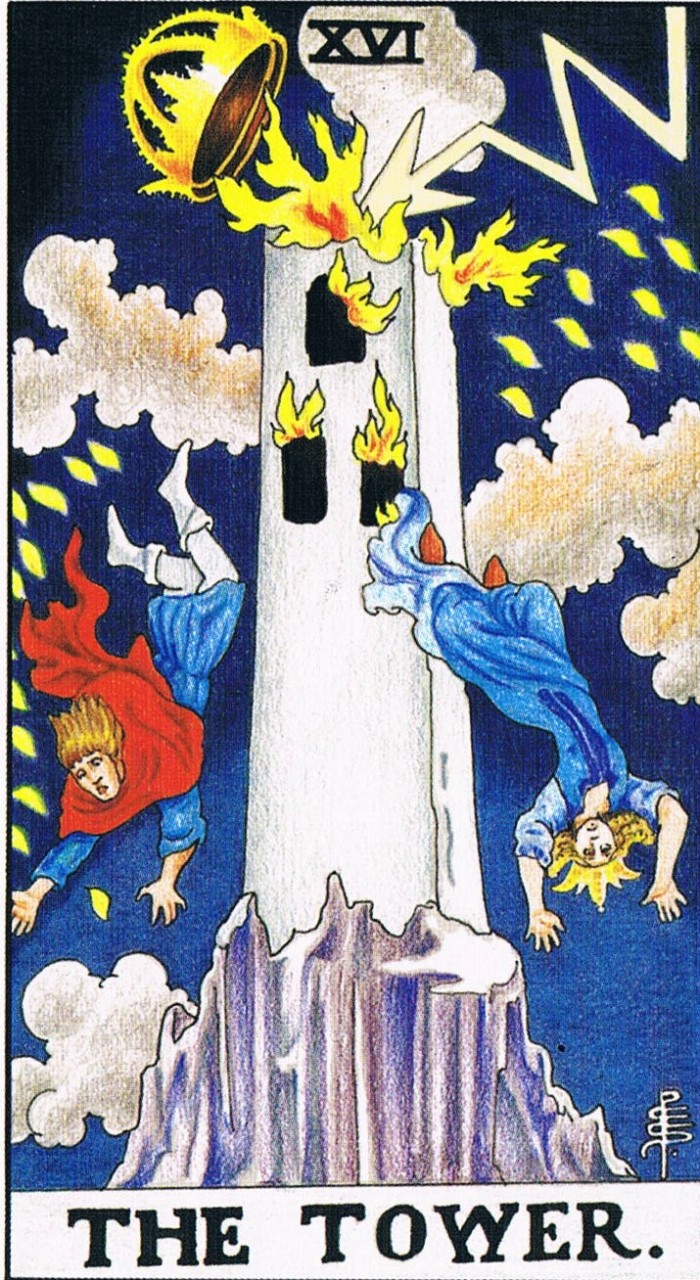 Or maybe not.  Over the past two months my health has been unusual, to put it mildly.  I can’t drive at present.  This means when my holiday ends, I may not be able to get into work.  There is a sense of suspension, of not quite knowing where I am or how I got here.  Of disbelief and shock.

This is the energy of The Tower . A sudden, unexpected change; the collapse of our carefully set plans and projects.  The crash of blocks as we add the final, too-much piece.  And the inevitable cry of “it’s not fair”.

Maybe not.  But maybe it isn’t fair anyway.  Maybe it is nature’s way of saying, too much already.  Stop.  This is too tall, what you’re building, too shaky to stand.  Maybe it is a way of shocking me awake.  Of reminding me of where I really wanted to be, when I wasn’t trying to follow a “logical” path, or the kind of life that would “make sense” when I laid it out for other people.

Maybe now is the time for crayon scribbling brilliance; for clashing, crazy colours.  The time for breaking apart, like ivy through stone, for unblocking the stream.  For giving up the safety of my tower, leaving the ruins behind and seeing what’s out there in the forests and wild moors.

"It is in all of us to defy expectations, to go into the world and be brave, and to want, to need, to hunger for adventures, to embrace change and chance and risk so that we may breathe and know what it is to be free." Mae Chevrette http://maechevrette.com/

Find me on social media