I was about three.  It was at our playgroup, in Allhallows village hall.  I remember lying on my stomach and watching it move towards me, a long, brown, speckled line, maybe six feet long, tongue flickering.  I wasn’t scared.  Amazed maybe.  Interested.  Fascinated by the touch of its smooth, soft skin.

Since then though I have feared snakes.  Something made me shudder.  Maybe all that old Eden myth, the voice of temptation and disobedience.  I never learned that there is wisdom in the snake, and the lesson of constant rebirth, the old skin dying away and left, just a husk.

This is what brings me to snake medicine today.

About a week ago I read something which jolted me.  I don’t remember where now.  It said that the snake sheds it skin, and leaves it behind, it doesn’t go back to it.  So when a friend pulled this card from me from Ethony’s Awakened Soul Oracle it was timely. 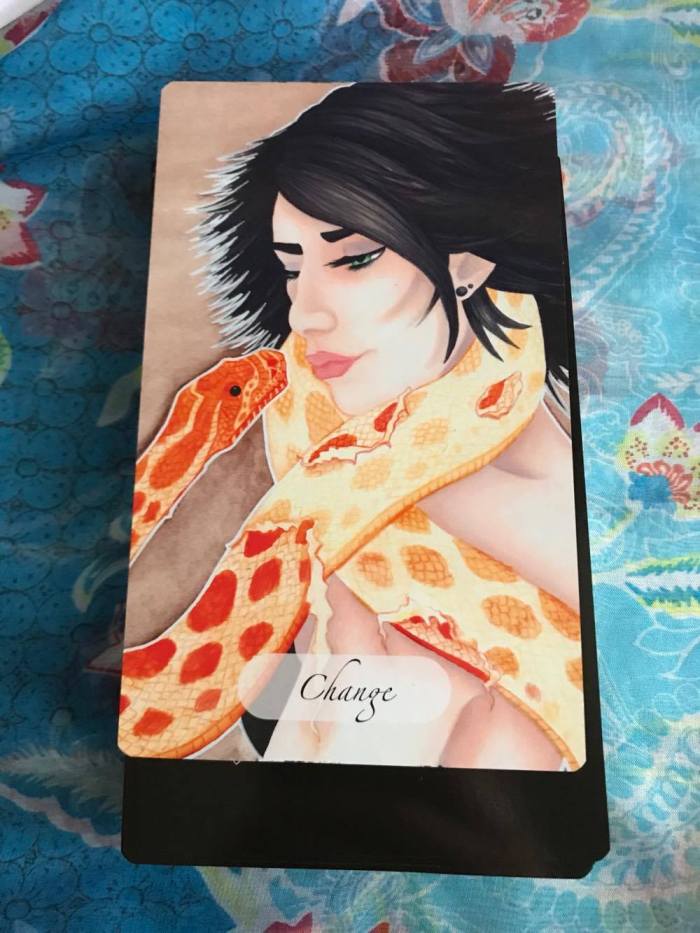 I have been shedding my skin.  Actually literally shedding my skin through chronic eczema for the past four months. But also shedding my emotional – soul skin.  The ways of a lifetime do not work anymore, old patterns, ways of being.

It reminds me of Jesus’ parable of the wine skins, you don’t put new wine in old wine skins, they’ll burst.  You don’t put a newly reborn soul in an old soul skin, it won’t be able to hold it…it’s not the right skin to be in.

But I have been running back to it.  Picking up the translucent shell of my old self and trying to stitch something together from it, create some kind of patchwork self, afraid of letting it go, of leaving it. Of releasing.

I want to thank the old skin.  For the lesson.  For carrying me and holding me when I needed it.  For being my edges and my boundaries for a time.  For knowing when it was time to leave, even when I didn’t think I was ready.

It is dead now, brittle, only a wraith-like cocoon.  It was the space in which I grew for a while, the womb of my new self.  But it has served its purpose now.  It does not  mourn for itself.  It is not sorry.  This is what it was for.  And I no longer fit it.  It was too small.  Too tight.  Too restrictive.  So it died and I wriggled free.

"It is in all of us to defy expectations, to go into the world and be brave, and to want, to need, to hunger for adventures, to embrace change and chance and risk so that we may breathe and know what it is to be free." Mae Chevrette http://maechevrette.com/

Find me on social media